New Delhi: The thick haze over the city on Friday was enough to tell people that Delhi’s air quality had deteriorated to become ‘very poor’. With hardly any wind, the overall air quality index logged 366 on Friday evening, the most elevated pollution level recorded so far this winter season and the worst since January 22, when the AQI was 370. According to Central Pollution Control Board data, at least 10 air quality monitoring stations recorded readings in the ‘severe’ category, or over 400 on the AQI.

With forecasting agencies saying wind speed would remain sluggish over the next 48 hours, the haze is likely to persist. Given the conditions, the Supreme Court-appointed Environment Pollution (Prevention and Control) Authority advised people to leave home only if absolutely necessary and to wear a mask at all times.

A scientist at the India Meteorological Department (IMD) said the air quality has deteriorated mostly due to calm surface winds. “Wind speed has dropped and almost calm conditions during the day is leading to pollutants accumulating,” said the met official.

According to Council on Energy, Environment and Water (CEEW), low mixing height, or the trapping of pollutants closer to the ground, and low wind speed hamper smoke dispersion, with the farm fires adding to the pollutant burden.

The System of Air Quality and Weather Forecasting and Research (SAFAR), a forecasting agency under the Union ministry of earth sciences, pegged the share of emissions from stubble burning in the pollutants in Delhi’s air at 17% on Friday. SAFAR reiterated that the spike in pollution was largely due to “extremely calm surface winds” and low inversion height that was trapping pollutants closer to the ground.

“The highly calm surface wind conditions prevailing over the Delhi region are forecast to continue for the next two days,” said SAFAR. “This will lead to low ventilation conditions and little dispersion of pollutants for an extended period and, hence, the accumulation of pollutants near the surface. Further deterioration in the AQI is predicted for the next two days.”

The Early Warning System for Delhi, also developed by the Union ministry of earth sciences, meanwhile predicted the AQI would remain in the ‘very poor’ category for the next three days, because of light winds and stagnant meteorological conditions, along with mist, which would remain in place until October 26.

EPCA chairman Bhure Lal told TOI that no additional measures to control pollution in the capital were being implemented, though the environment body was keeping a keen eye on the situation. “Since the soaring pollution is due to meteorological conditions and lack of winds, there isn’t much that can be done to change that,” he reasoned. “However, people must take precautions.”

Dipankar Saha, former head of CPCB’s air laboratory, said, “The current wind direction is north-north-west, but it is likely to shift to west. The wind speed is improving gradually, and we anticipate a rise in speed to 8-9 metres per second, which is a good sign.” 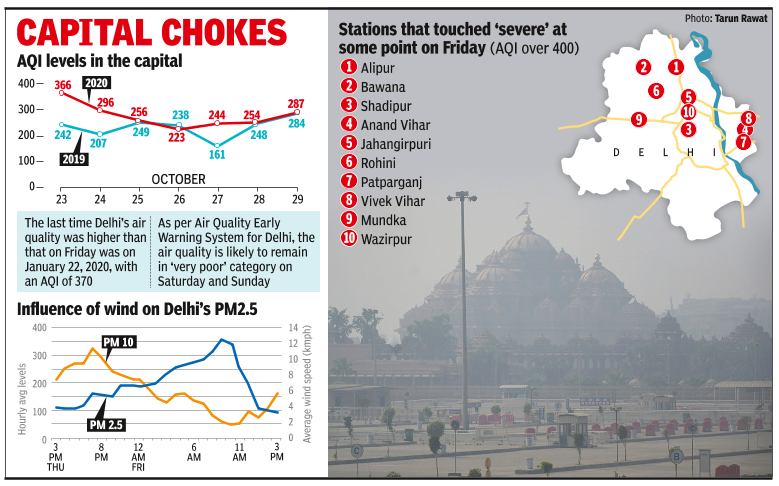 How India plans to vaccinate against coronavirus

Covid, other medical tests are not always definitive

Mass vaccination against covid will be a challenge for Alabama and other poor, rural states

How to keep your sadness from turning into depression