HYDERABAD: At a time when Hyderabad is seeing a jump in colon cancer cases, a landmark study at the University of Hyderabad (UoH) revealed that various bacterial species in the human intestine, including strains of E.coli, is triggering colorectal cancer.

After analysing 4,000 plus genomes of bacterial strains of E. coli, the common bacteria found in the lower intestine, researchers said the genotoxic strains of the bacteria is a huge risk factor in colorectal cancer.

Colorectal cancer affects the colon and the rectum at the digestive tract’s lower end. It is commonly known as bowel cancer, colon cancer or rectal cancer.

The MNJ Institute of Oncology Regional Cancer Centre and several other institutes received double the number of colon cancer cases in 2020, compared to previous years.

Niyaz Ahmed, department of biotechnology and bioinformatics, school of life sciences, UoH, said the study would help understand bacterial toxins that are associated with colorectal cancer.

Researchers said that while they know that bacterial toxins result in cancer progression, the study was to find out the proportion, risk, transmission and possible prevention of such bacteria.
“The idea was to determine the exact nature of the risk. How they are carried, where are they acquired in the body, probability of acquisition and domination of such bacteria and their evolution, etc,” said Prof Ahmed.

Bacterial strains of E. coli that produces colibactin, a toxin that breaks the DNA leading to cancer, was studied by the team of researchers.

“We found that such genotoxic strains occur at about 12% among all the E. coli populations world over and up to 7% in India,” he said.

The findings of the study were published in the March 2, 2021, issue of an international journal, mBio published by the American Society for Microbiology.
“Colibactin encoded by the family of E. coli has a character that causes a chemical change in the DNA. The DNA codes are modified by this bacterial protein and some of them get selected for cancer,” added Prof Ahmed.

According to an estimate, there are close to 14 trillion different bacterial cells of about 2,000 different species types in a human gut. 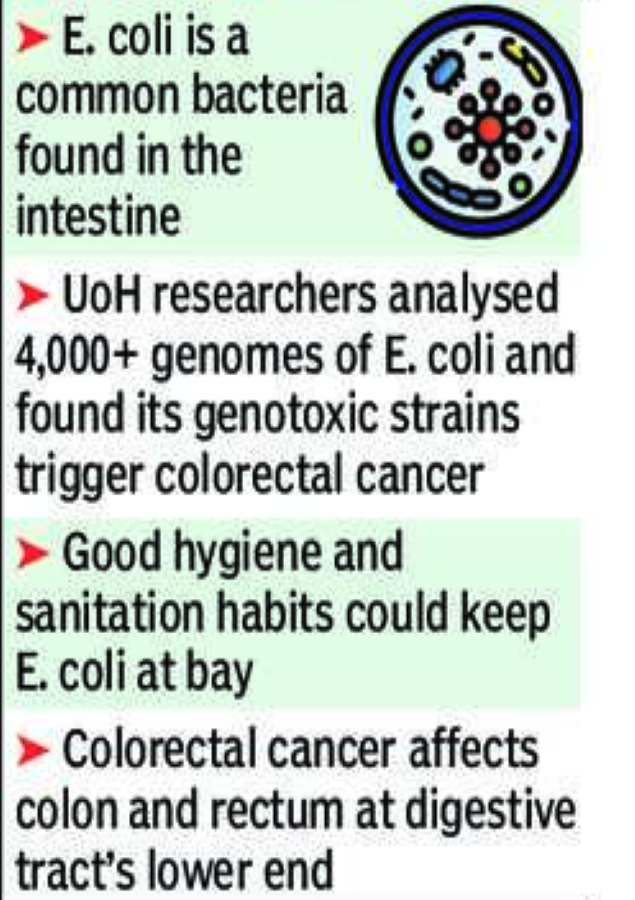 Red flag goes up on diagnostic stock after Covid 2.0 lifted it 51% in 2 months

UP: Hospitals turning away Covid-19 patients to be booked under Epidemic Act

Hope of patent waiver? US talks of disparity and EU of flexibility