“We found favipiravir improved the time to clinical cure by around three days,” said the study’s main author Dr Zarir F Udwadia. Patients who took the drug cleared the virus 30% (two days) faster than those on standard treatment. The study has been published in the peer-reviewed International Journal of Infectious Diseases. “This may not sound like a very big difference, but is significant. There are so few treatment options that when a drug gives even a promising signal, it’s exciting news,” said Dr Udwadia.

Since the Covid-19 pandemic began almost a year back in Wuhan, China, various drugs have been tried out to control it. Apart from steroids, though, none of the other drugs ranging from plasma to remdesivir to HCQS have been scientifically shown to help Covid-19 patients.
The current favipiravir trial was conducted from May 3 to July 3 among 150 patients admitted at Breach Candy Hospital; as it was a randomised trial, 75 patients were given favipiravir and another ‘control group’ other drugs. “The median time to cessation of viral shedding was five days versus seven days in the control group,” said the study. The median time to clinical cure was three days in the 75 patients treated with favipiravir versus five in the control group.

The study concluded favipiravir may be beneficial in mild-to-moderate Covid-19 cases.

“If the results from our study are validated by other larger studies currently underway in Boston and Stanford, favipiravir could have a role akin to oseltamivir (another antiviral used to treat influenza such H1N1),” said Dr Udwadia.

Dr Shashank Joshi, member, state task force on Covid, concurred favipiravir is a “good” drug. “It is a good drug if used in the first 72 hours. One needs to hit hard and hit early,” said Dr Joshi, who was not a part of the current study but had previously published one on favipiravir.

The drug is widely prescribed in India for patients who prefer home isolation as it is an oral medicine (remdesivir is given in IV form in hospitals).

“DCGI approved the use of this drug rather prematurely, I thought, in the early days when the pandemic was raging in June. It was important for us to put this drug to the test by rapidly designing a good randomised, multicentre Phase-3 study, which we implemented aided by the main manufacturer of this drug, Glenmark,” said Dr Udwadia. “It’s a safe drug, except in pregnant or lactating women.” 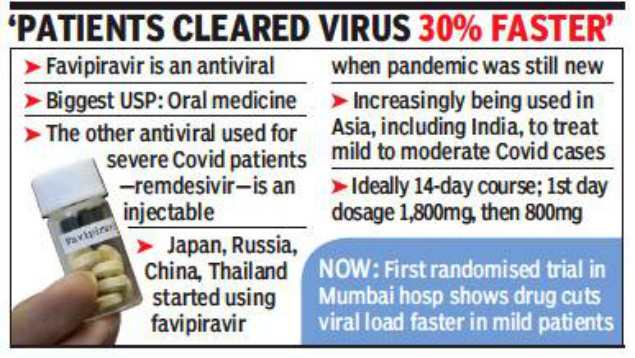 WHO, partners roll out faster Covid tests for poorer nations

Pandemic: When the going gets tough, innovators step up their game

What We Know About AstraZeneca’s Head-Scratching Vaccine Results