NEW DELHI: Testing and tracing are key to containment of the coronavirus pandemic, but are states screening enough people for Covid-19 infections? A TOI sample study shows Kerala, which had added more than 70,600 cases in just 14 days, has conducted a total 7.42 lakh tests during the same period between January 9 and 22.

It has emerged that Kerala, despite having a 10% positivity rate (total confirmed cases per 100 tests), has not enhanced its testing as much as required. The total tests conducted by the state slightly improved from 7.1 lakh during December 27-January 9 to 7.4 lakh in the following fortnight.
In comparison, UP, with a positivity rate of 0.3%, tops all states with fortnightly Covid tests of 16.7 lakh, followed by Karnataka (12.3 lakh), Bihar

While most of the states in India have brought the pandemic under control with the positivity rate falling below 1%, Kerala and Maharashtra are the only ones still in the red zone with 9.5% and 5% respectively. A positivity rate above 5% is indicative of the fact that a state is testing less and only the sickest. A fall in the daily cases of cases has also been reflected in the all-India tests which have dropped from 1.2 crore during Dec 27-Jan 9 to 90.5 lakh in the following fortnight ending Jan 22.
UP and Bihar are the only states having conducted more than 2 crore tests so far. The total tests in UP, as on January 26, is 2.7 crore and in Bihar 2.1 crore. Maharashtra, which has the highest number of just over 20.1 lakh cases and over 50,000 deaths reported so far, has conducted 1.4 crore tests till date, less than Karnataka 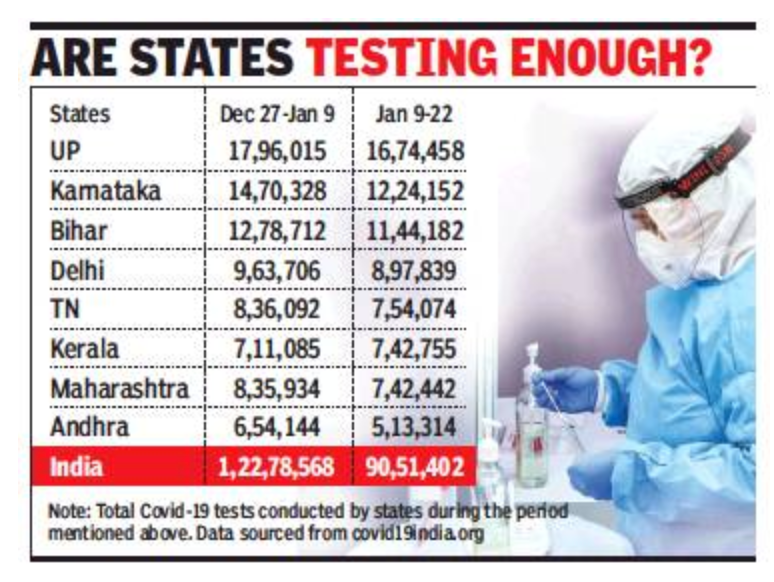 India-made COVID-19 vaccine could be launched as early as February: Government scientist

The Call That Saved My Father-in-Law’s Life